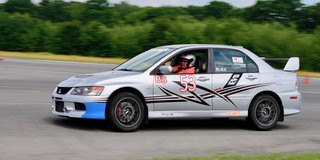 Our final Wendi Allen Scholarship recipient is Jessica Black. Jessica lives in Central Pennsylvania and went to school at Penn State University, where she earned a degree in Electro-Mechanical Engineering Technology. She currently works as a Product Design Engineer, designing power distribution products for commercial and military usage. She also designs printed circuit boards, which she mentions is the favorite part of her job. She also happens to drive a completely stock Mitsubishi Evo IV, and went from joining the SCCA to being Regional Executive in just three years. To learn more about Jessica, her rapid rise to RE, and what drove her to start autocrossing, read on!

JH: First, as I have with all of the others, I must congratulate you on being chosen as a Wendi Allen Scholarship recipient. Where were you when you first heard, and what were your initial thoughts?

JB: I was at work on a typical Monday. I got an email from Howard Duncan, asking me to call him as soon as I could.  He added in capital letters, “YOU’RE NOT IN TROUBLE!,” which is always good to know!  So, I called him back over lunch and he let me know I was one of the three chosen. I was shocked, really. I thought it was pretty cool that a few people took the time to write something up to nominate me.

JH: Let’s start at the beginning. When did you first autocross, and were you always into cars and racing?

JB: Well, I didn’t even get my license until out of high school. But my cousins were all into cars and car shows. And when I got out of college, I decided I wanted a car with some “juice” as all my friends had faster cars. My Chevy Beretta just wasn’t cutting it, so I got a Colbalt SS and started modding it.  After a bit, I wanted to get something a bit better for winter, and in 2008 I saw an EVO for sale at one of the dealerships. At first, I thought it was an STI, lol. Anyway, I took it for a test drive, and ended up buying it two days later. It was in 2010 that a friend, knowing I had an EVO and how good they were for autocross, told me I had to come check it out.  I was hooked after my first event! So much better than a car show. I always thought they were boring. I’d rather be out driving my car!

JH: It does sound like you got hooked!  I see you went from joining the SCCA in 2010 to being an RE by the middle of 2013. What compels a person to sort of jump in head first and step up like that? What was the timeline like for that?

JB: Well, I had become a member in 2010, and in 2011 I was just coming out to autocross. But I am the type to always help out where and when I can, and I saw it was a small group of people doing a lot of the work. So, a friend and I decided to start attending the membership meetings in 2012.  During that time, I was asked to finish the year as Secretary. The next year I was elected as Asst. RE, and when the acting RE had to step down, I took over there and have been the RE ever since.  I had to learn a lot in a short amount of time. But, thankfully, many of the members helped me learn the ropes along the way. We have a lot of new and current members that help me keep the Region running and work with me to keep our members satisfied.  I didn’t expect it all to go this way. It all just started with a desire to help out.

JH: Wow, that is a quick climb up the ladder! That kind of commitment is a real testament to your love for the sport and its growth. What do you love about autocross that compels you like that?

JB: I love autocross for the challenge it gives me. My car is completely stock, so no excuses for setup or anything.  It’s all on me as the driver.  I have had other people drive my car and beat me.  So that tells me that I, myself, have to work on my driving skills.  I am constantly pushing to get better as a driver, and I love that challenge.  I also love that I have met and gained so many friends through SCCA activities, and I think those activities, and all the people I have met, has made me a better leader and person.

JH: That is a really cool answer. And I always wrap these interviews up with one question: What would you tell another woman that is on the fence about coming out and trying autocross?

JB: Don’t be intimidated. I was nervous my first time out.  I was worried about doing it right, or worried that I might spin out.  But you have to learn somewhere how to push the limits, and this is a great place to do that.  Just come out and go for it!