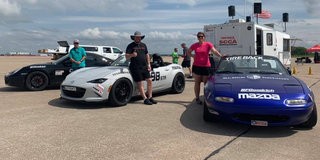 The Tire Rack ProSolo® season has reached its halfway point with the completion of the 2019 Tire Rack Lincoln Spring Nationals ProSolo this past weekend. Despite drying conditions Friday morning, 221 competitors took to the large mirrored courses at Lincoln Airpark. By the midway point of first heat runs, the concrete surface had dried. Despite threats of rain throughout the event, it remained dry giving all drivers at least two heats with dry conditions.

He’s usually in a CAM Cobra, but Joey Green jumped in his dad’s E Street Toyota MR2 Spider while the Cobra gets an engine transplant. He shocked the status quo in the 16-driver class by taking a 2.4-second lead in the wet Friday morning. Eric Peterson took over the lead in the dry later in the day, but Green was able to pull improve on both courses Saturday morning to take the class win by 0.493 second over Peterson. Matt Waldbaum, Sean Minehart and Bartek Borowski claimed the remaining trophies in the stacked class.

Solo Spec Coupe is billed as close and competitive racing and that couldn’t have been truer in Lincoln. During Friday afternoon runs, Dave Schotz laid down a pair of flier laps that would stand through the next morning, giving him the victory over Jimmy Vajdak by 0.044 second. Matt McCabe was a mere 0.081 second back in third while Chris Hammond and David Spratte claimed the fourth and fifth place trophies respectively. All five trophy positions were within a 0.600-second margin.

Yokohama recently released a new 200 tread wear tire and David Whitener was one of the few drivers using it this weekend on his Street Touring Roadster Mazda MX-5. Whitener led throughout the event over Brian Karwan with a final margin of victory of 0.255 second. Marcus Pyne, Josh Luster and Mark Shrivastava claimed the remaining trophies in the 16-driver all MX-5 class.

Street Touring Sport also drew 16 drivers with a great battle at the top between Honda CRX and Mazda Miata. Gerry Terranova led after the Friday morning session in the Miata despite Adam Barber having the faster raw times in his CRX. In the afternoon, Barber cleaned it up and was able to stretch out a 0.487-second lead on Saturday morning to take the win. Mark McKnight, Mike Snyder and Will Hornseth claimed the third through fifth place trophies respectively in a slew of Honda CRXes.

Ron Williams’ new Honda Civic Si wasn’t even off the temporary plates when he brought it to Lincoln. It seemed to suit him as he took the Street 4 win by 1.188 second over reining G Street National Champion, Lance Keeley. Behind those two, the results showed the wide variety of cars present in the class with Audi, Subaru, and Hyundai represented as David Hedderick, Riley Heaton, Brad McCann and Thomas Thompson claimed the remaining trophies.

As of 2019, Race Tire Index 1 includes Kart Modified. The 18-driver class was made up of one from CM, one from DM, two from EM, three from KM and eleven from FM. It became clear during Friday morning runs that the battle would be tight between the top four drivers of Jason Hobbs, Larry MacLeod and Jeff and Zak Kiesel. MacLeod led after Friday morning, 0.8 second ahead of Hobbs while Jeff Kiesel stood on coned runs. In the afternoon, the elder Kiesel cleaned it up to jump to the lead. On Saturday morning, all four leaders found time with Jeff Kiesel taking the win by 0.427 second over a charging Hobbs. MacLeod ended up a mere 0.094 second back in third with Zak Kiesel another 0.321 second behind in fourth. Tom Harrington and Brad Smith claimed the fifth and sixth place trophies respectively.

In Ladies Class 2, Jordan Towns took an early lead in the rain while capitalizing on her all wheel drive advantage in the Subaru WRX. After the sun came out, Laura Campbell jumped to the lead in a BMW M2. During her open co-driver’s runs, the transfer case in Towns’ WRX failed. She took her Saturday morning runs in a borrowed D Street Chevrolet Camaro, nearly matching her times in the familiar WRX. While she acclimated, Laney Blume capitalized and jumped to the second position in her new Honda Civic Sport. Campbell improved on both sides to finish with a 0.606-second margin of victory.

In the Ladies Challenge, cones and red lights dictated the results, even in the final round where both Kim Whitener and Laney Blume red lit. The victory went to the driver with the least extreme red light, giving Whitener the win. It was like déjà vu when the Super Challenge ended with David Whitener taking the win due to a red light by Brian Karwan. The Bonus Challenge was a duel of Porsche Caymans with Paul Brown taking the win over Eric Jones.

The 2019 Tire Rack ProSolo season continues this coming weekend in Mineral Wells, Texas. More information about this event and the entire ProSolo season can be found here.