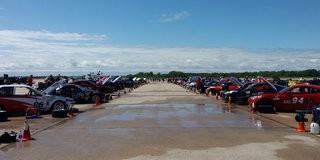 After two days of Tire Rack ProSolo® competition over the Memorial Day weekend, many competitors stayed at Lincoln Airpark, and more joined, for Sunday and Monday’s Tire Rack Lincoln Spring Nationals Championship Tour. This event represents the largest Championship Tour of the year with 322 competitors testing their skills and their cars at the home of the Tire Rack Solo Nationals in September.

Much like the ProSolo, competitors arrived on site Monday morning to find a very wet site. Standing and flowing waters created challenges for heat one and two drivers. The water was reduced to isolated puddles by the start of heat three and was completely gone for fourth heat drivers. The drying conditions, especially in heat two, created an advantage for second drivers and shook up the standings.

In A Street, David Green left day one with a scant 0.045-second lead over Ryan Clark, but the conditions on day two shook up the class. Many struggled with the wet, and several drivers were forced to stand on first and second runs. Green fell out of the trophies while Clark was forced to stand on his first run. Clark's first run was strong, allowing him to take the win while Greg Janulis set the fastest time in the wet to jump into second, just 0.017 second back. Eric Jones had been fourth on day one and retained that position with a good run the wet to complete the all-Cayman podium. Chris and Dennis Sparks claimed the fourth and fifth place trophies with Dan Simms settling into the sixth and final trophy position.

B Street competitors also faced the wet conditions with Jeremy Foley leading on day one despite chronic back pain. In the wet, Jason Bucki and Paul Brown set the fastest times in the class. For Bucki, it was enough to take over the lead from fifth on day one. Foley was able to hold onto second with David Marcus and Brown in third and fourth respectively.

C Street Prepared brought drama as the Davis’ Miata engine let go during third runs on Sunday. Billy had led on day one and jumped into Matthew Hodges’ Miata for the second day of competition. Davis beat the car owner by 0.134 second to take the win by 0.423 second over Hodges in second. Todd Cochran claimed the third and final trophy position. Neal Tovsen set the fastest time on day two, but a cone on his fastest run on day one kept him out of the trophies.

Super Street Prepared faced some of the most dramatic drying conditions as competitors frantically changed tires between runs as the surface dried. Eric Stemler had led after day one, 0.174 second ahead of co-driver Joe Tharpe. When Stemler finished his final run on Monday, he did so with the lead. But when second drivers took the course, Ryan Johnson bested him before Tharpe laid down the winning run to claim victory by 1.640 over Johnson. Stemler stayed in third for the final trophy.

Mark Madarash’s C Prepared Pontiac Trans Am only made one run on Sunday, but even with a cone it was fast enough to hold the lead until third runs when Chris Miller and Dave Zitzlsperger snuck ahead. On Monday, the Trans Am was fixed and able to take all of its runs. Madarash’s final run was enough to regain the lead for a 0.187-second margin of victory over Miller. Zitzlsperger and Bob Ely claimed the third and fourth place trophies respectively.

The six-driver Super Street field’s times all fell within a one-second range on Sunday, but that was not the case on Monday as Erik Strelnieks overtook James Yom and Doug Rowse for the top position. Yom claimed the second and final trophy position, 0.454 second behind Strelnieks.

Solo Spec Coupe Ladies’ eight-driver field was the largest of the Ladies Grid that ran during the fifth heat. Chris Peterson led after day one by 0.248 second over co-driver Jennifer Bedell. On day two, it was Bedell who pulled off a flier on her third run to take the win by 0.641 second. Cindy Duncan claimed the third and final trophy.