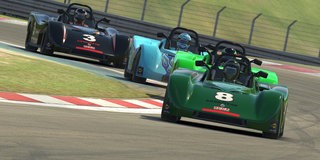 There are just two weeks of racing left and, of course, it is coming down to the wire for our SCCA® Spec Racer Ford Challenge iRacing series presented by the Skip Barber Racing School. Tommy Bordeaux has managed to pull out his lead just a little bit over Zachary Le Vey, but it looks as though Le Vey isn’t going to let that go too far. This time last season, Le Vey had fallen back in the pack a bit, so this time around he will be a bit more hungry for that top spot!

Brett Holton and Steve Owens are having a fierce battle all their own for third. So fierce, we have our first-ever tie in the points! Owens has pulled himself even with Holton with just two weeks left. This podium is nowhere near decided.

In the rest of the top ten, Zachary Rivard and Suraj Pradhan are both making big pushes and have gained spots in the points this last week, lining up behind John Young in fifth place. So even though we only have two weeks left in this season, there is still some serious racing left to happen, keep your eyes peeled!

Below are the current standings with position, name and points.

Want to get involved in the SCCA Spec Racer Ford Challenge iRacing series presented by the Skip Barber Racing School? Click here to sign up today! New to iRacing and want to get your rig started? Check out this article on how to get started into the fast action world of sim racing, including everything from a computer spec startup guide to physically getting your sim rig ready to go! With no greasy hands and maintenance bills, online simulator racing programs such as iRacing.com offer hours of unlimited practice with a broad spectrum of to-scale tracks and cars to get you moving fast!