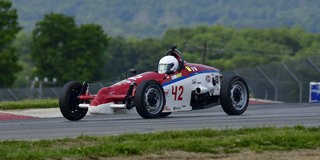 The Formula Atlantic Northern Conference championship was decided by five scant points as Paul Ravaris, driving a Pro Formula Mazda, edged out the Swift 016 of Larry Howard, 66 points to 61 points. The Formula Mazda Northern Conference championship was close, too, as Owen McAllister managed to claim victory by only eight points over William Snyder thanks to two wins during the Hoosier Super Tour at Mid-Ohio Sports Car Course.

Formula Vee (FV) saw a heck of a championship fight in the Northern Conference as the top three finishers were only separated by seven points. Andrew Whitston and his Protoform P2 took the top spot with 138 points. Zachary Whitston, also driving a Protoform P2, and Stuart Delaney, in a Caracal C-SB, where right behind Andrew with 131 points each. However, Zachary claims the runner-up spot in FV based upon his three victories as compared to Delaney’s two second-place finishes on the season.

Combined, the Spec Miata (SM) and Spec Racer Ford Gen3 (SRF3) classes accounted for more than 180 competitors during the 2019 Northern Conference season. In SM it was Voytek Burdzy who bested 95 other racers to claim a championship. And in SRF3, S. Sandy Satullo III was cream of the crop amongst a field of 90 drivers.

The Northern Conference began its racing season in early May with Round 1 and Round 2 at Blackhawk Farms Raceway in South Beloit, Illinois, followed by a competition weekend at GingerMan Raceway in South Haven, Michigan. Then it was off to Mid-Ohio Sports Car Course for a Hoosier Racing Tire SCCA Super Tour event. June saw a second Hoosier Super Tour weekend, this one being the WeatherTech Chicago Region® June Sprints® at Road America. July brought about another race weekend at Road America in Elkhart Lake, Wisconsin, before the season came to a close in August with Round 11 and Round 12 at Grattan Raceway in Belding, Michigan.

The Sports Car Club of America®, Inc., founded in 1944 and currently celebrating its 75th Diamond Anniversary, is a 67,500-member motorsports organization that incorporates all facets of autocross, rally and road racing at both Club and professional levels. With headquarters in Topeka, Kansas, the SCCA annually sanctions over 2,000 events through its 116 Regions and subsidiary divisions. Much of the SCCA’s activities are made possible with support from the following Official Partners: Hagerty, the Official Insurance Partner of SCCA; Hawk Performance, the Official Brake Products of SCCA; Sunoco, the Official Fuel of SCCA; and Tire Rack, the Official Tire Retailer of SCCA. To learn more, please visit www.scca.com.