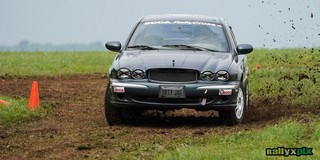 The opening round of the 2020 the DirtFish SCCA RallyCross National Tour brought fierce competition across multiple classes to the Ross County Fairgrounds in Chillicothe, Ohio for the Great Lakes Challenge. The entry list shrunk by a few competitors over the week leading up to the event due to the threat of rain, but the skies never truly opened and those who did make the grid on Saturday were treated to two days and fifteen runs of fun over three challenging courses.

Leading off the field was Modified Front Wheel Drive, Stock All Wheel Drive, and Stock Rear Wheel Drive. Modified Front was one of most competitive fields of the weekend. Ohio Valley Region regular Pete Bates took the early lead in his Nissan Sentra SE-R thanks to gaffes from ZB Lorenc, Andy Thomas and Daniel Hutchinson on their first runs. However, by the end of day one, the trio had mounted a comeback and occupied the top three slots of the podium with Lorenc leading the way in his supercharged Volkswagen GTI despite having to make an unconventional repair in the afternoon—using a bottle of ice water to cool off an overheating ECU. Both Thomas and Hutchison made late charges to unseat Lorenc from the top step of the podium on day two, but Lorenc managed to hold on and claim victory in the name of Ohio by just over two seconds. Thomas brought home second in his Toyota Celica, while Hutchinson made an impressive recovery to claim third place in a Honda Civic.

In Stock All Wheel Drive, 2019 DirtFish RallyCross National Champion Josh Armantrout led another strong field from start to finish with an impressive win in his Ford Focus RS.  Noah Quick took home second place in a Subaru Impreza WRX, while Chris Endres picked up third in on of the most peculiar and popular vehicles in attendance—a GMC Typhoon. The Stock Rear Wheel Drive was a two-horse race between locals John L. Voegeli in a Mazda MX-5 Miata and Lothrop Withington IV in a Toyota MR2 Spyder. Withington took the lead early, showing off the superior traction of his Toyota’s mid-engine layout, and turned in a quick and clean drive to take the win.

The second heat consisted of all the Prepared classes. Matt Wolfe led the ten-car Prepared Front Wheel Drive field in his Ford Escort GT after the morning course with a scant 0.7-second advantage over Josh Remmetter, but Leon Drake was lurking in third by only a second after tagging a couple pylons. The afternoon brought a reversal in order at the top, with Remmetter edging out Wolfe by 0.2 second to take the lead. Drake swapped to his unconventional tractor tires in the rear for the afternoon but could not move up the order and remained in third. The drying and firm conditions of the afternoon course seemed to favor the gravel tire/welded differential setup of Derek Denti’s Ford Focus SVT, as he shot ahead of Warren Elliot in fourth, within a second of Drake while turning in times no other driver could match. The battle resumed on day two and after the final four runs, it was Wolfe who emerged with the win by a margin of 3.9 seconds over fellow Detroiter Remmetter in a Mini Cooper S. Drake finished in third just over a second behind Remmetter in his Honda “C-R/X.” Denti held on to fourth, despite Elliot mounting a comeback in his Mini Cooper S.

Prepared All Wheel Drive was an all-Subaru show, with Ohio’s own Kyle Kreitzer putting on a clinic and turning in one of the fastest overall times of the weekend in his Subaru Impreza 2.5 RS. Bringing home second place was Andrew Layton in his WRX, with Jason Burdette keeping him honest in third in another WRX. Prepared Rear Wheel Drive was a single car class, but still managed to be one of the most colorful thanks to the “Unicorn” liveried Mazda MX-5 Miata of Shawn Roberts and Katie Orgler. Roberts took home top honors, turning in a time that would have nearly put him on the podium in Modified Rear.

The final heat consisted of Stock Front Wheel Drive, Modified Rear Wheel Drive, and Modified Front Wheel Drive and provided some great battles throughout the weekend. Stock Front saw an unusual shift in the standings after day one, with Harold Denham leading multi-time National Champion Chang Ho Kim by just under a second. The tightest battle of the weekend got even closer on day two with the pair trading fastest times over the final four runs, but Denham managed to hold on and pull out the win by 0.8 seconds for New England Region in his Mini Cooper S over fellow New Englander Chang Ho Kim in Acura Integra Type R.

Meanwhile, in Modified Rear, an all-Mazda Miata battle of former National Champions raged between John W. England and Brianne Corn. Despite tagging four pylons over the first two courses, England had managed to pull out a 2.3-second gap over Corn, who made a rare mistake on the first run of the afternoon that cost her the lead. She still held a 3.9 second lead her co-driver Peter Dozeman. England’s day was made even more exciting by a bizarre failure with his car’s air intake, which resulted in his air filter sock becoming lodged in his throttle body and only a few millimeters from being ingested into his supercharger. England discovered the failure after his throttle jammed open at the end of a run. “My weekend almost came to an end right there”, said England. “Had it gone almost any further in, that would have been the end for us.” Corn managed to recover on day two though and put in an impressive drive to claim the win over England by 5.6 seconds. England took out a pylon on the first run of day two, and had to settle for second, while Dozeman rounded out the podium in third.

Modified All Wheel Drive would have been an all-Subaru show like PA were it not for the unusual presence of a Jaguar in the field. Dayton, Ohio native Ben Kirchner proved that even unconventional cars can be fast and kept eventual winner Mike Detota honest all weekend in his AWD X-Type, but Detota would ultimately claim a decisive in in his Impreza WRX as well as the fastest overall time of the weekend. Logan Siegel, another Ohio native, brought home third place in his Subaru Impreza just edging out Kirchner’s co-driver Andrew Hamilton in the Jag.

Registration opens tomorrow, July 1, for the 2020 DirtFish SCCA RallyCross National Championship, scheduled for August 14-16 at Road America in Elkhart Lake, WI. More information about that event can be found here.